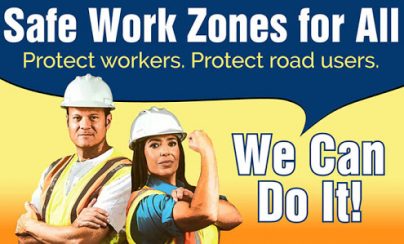 As Spring arrives awakening fauna and flora alike, so too awakens the construction on our roadways. It seems quite fitting that we celebrate National Work Zone Awareness Week April 20 – 24, 2020. But I would argue that, while it is great to have an awareness week, we should be aware in work zones at all times. The statistics on work zone injuries and deaths back up that argument year after year.

Although statistics are important and you will find them in this writing, I feel it is more important to hear from those who call the work zone their office. Real people with real families who depend on them to come home safe after their shift.

I have spoken to roadway workers from many disciplines. Of those I spoke to I could not find anyone who has not had at least one close call in a work zone. They also report that the dangers have become worse in recent years. When asked what they feel the cause of the increased close calls and actual accidents is, the common answer is distractions. Drivers are on their phones, looking at GPS, and distracted by a host of other gadgets.

I then asked the roadway workers what they thought could be done to make work zones safer. Everyone I spoke to agree that more consistent enforcement from police. They all explained that they have seen police giving warnings more often than they have seen police giving tickets. Unless drivers are held accountable for putting workers’ lives in danger their driving habits will remain the same. Some may feel warnings are enough, if you are one, I challenge you to think about the more than 120 lives lost on average in work zones every year. Ask their families if they feel warnings are enough. I also invite you to watch this Michigan DOT video “Work Zone Safety – Everybody’s Responsibility” through this link, https://www.youtube.com/watch?v=AimUG-y6cHA . This will show you a real family and real coworkers dealing with the death of Justin Vallad. Justin was doing his job in a work zone just like any other day, but it would not be like any other day.

So as we start the main season of roadway work with National Work Zone Awareness Week, let’s honor those who have lost their lives. Let’s continue to honor them by slowing down and keeping our eyes on the road at all times but especially in work zones. Doing these things will also show respect for the workers in these work zones. Respect for workers like those I interviewed, Lori a flagger, Jeremiah the owner of a flagging company, Dave a pavement marking company owner and technician, as well as the contractors and emergency responders I spoke to.